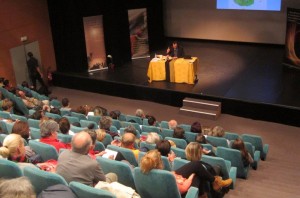 The philosopher Olivier Larregle gave a talk to a large audience on the humanistic values of The Little Prince, a story supposedly for children. It has been translated into more than 257 languages and dialects, and more than 200 million copies of it have been printed. The Little Prince is more than a children’s story, however, as it deals with universal values. The dialogue between the pilot and the little prince is the image of man’s relationship with what is existential (pilot) and what is essential (little prince). At the very beginning of the book, Saint-Exupéry warns: “My book is not light entertainment”. Friendly words, rituals, mysteries, love, responsibility, death, fate, the star… will be used by the various characters in the book (the inhabitants of the asteroid, the rose, the fox and the pilot, the plane, the Little Prince’s star). The Little Prince is more than a book, it is a real initiation into the true meaning of life.