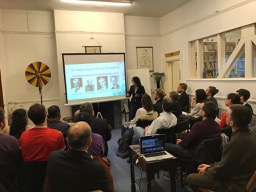 Many people are concerned about the frightening power of algorithms, ‘big data’ and the possibility of a world so dominated by machines that humans become devalued.

In a talk entitled “Artificial Intelligence: between Myth and Reality”, computer expert Dr. Catarina Moreira sought to dispel the myth that robots will take over the world. In a clear explanation of how computers and algorithms work, she showed that what computers cannot do is think. In that sense they are not really ‘intelligent’. However, one of the dangers of the increase in artificial intelligence is that we are becoming too dependent on machines and end up acting like robots ourselves, blindly following what the technology tells us to do. The solution, Dr. Moreira claimed, is to become more aware of what is going on around us, by reading, reflecting and questioning. In this way, we can avoid being controlled by those who seek to use technology to manipulate people into making the decisions they want.