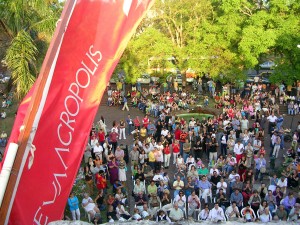 The International Organization New Acropolis has commemorated the 55th anniversary of its founding, in the more than sixty countries around the world in which it develops its programs in Philosophy, Culture and Volunteering.

Since its founding in Buenos Aires (Argentina) by Professor Jorge Angel Livraga Rizzi, New Acropolis has had the goal of reaching all parts of the world. Starting from a small core of young people, over the years it has been developing and strengthening its forms of action, based on its principles and objectives.

Along these lines,  the General Assembly of IONA, in its formal statement last April, 2012 in Sao Paulo, reaffirmed “its conviction concerning the importance of continuing to work on the development of moral and ethical values, which is one of its founding objectives, since these constitute the fundamental basis for the formation of character. Such values also enable human beings to understand humanity as a coming together of individual wills, where we all belong to the same family, not in a speculative and theoretical sense, but in a real way that allows us to share in both the pain and the happiness of others and to go forward together in our endeavour to build a better and more habitable world.”