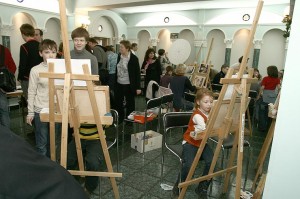 Last year, the “creative labs” that were launched in Russia, became a favorite activity of the audience.

This year, to commemorate the anniversary of Leonardo da Vinci several of these workshops were held, which provide the opportunity to learn things not only theoretical but to experience them for yourself.

Auric proportions in man and nature, the construction of a bridge with pencils only, without using nails, as well as seeing prototype of their machines in action, -models created from sketches- were undisputed protagonists this time.

There were special prizes for guessing who the purpose of various Leonardo’s inventions.