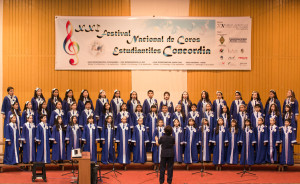 With the support of the Ministry of Culture and Tourism of the Plurinational State of Bolivia, the Autonomous Municipal Government of Sucre, the Royal and Pontificial Major University of Chuquisaca and various private companies, the selection phase of the 21st National Student Choir Festival came to an end last week in the cities of La Paz, Cochabamba and Santa Cruz.
Objectives
The Concordia Festival has been organized for the last 21 years with the aim of promoting the best possible training for the country’s children and young people by fostering choral activities especially at school level. 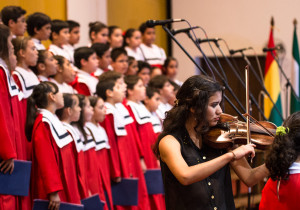 In total 11 choirs were selected to participate in this national event which will be held in the city of Sucre on 12th-13th October 2013.

In addition, the Gonzáles Duo (Classical Guitar) and the Choirs of the Autonomous Municipal Government of Sucre, and of the Royal and Pontificial Major University of Chuquisaca, as well as the Eduardo Laredo Institute and the Franklin Anaya Arze Institute of Cochabamba were invited to participate in this national event.

The National Contest will take place at the traditional Gran Mariscal Sucre Theater on 12th-13th October 2013.

With the support of several institutions in Sucre, New Acropolis is helping to prepare for the experience of a real choral celebration, in which over 800 children and youngsters in four cities are expected to take part.