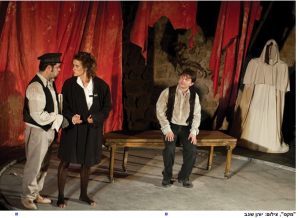 Tsvi Goren wrote: “Max is both a theatrical play and a myth. The last play I saw was perhaps the most surprising, even if the play ‘Max’ by Amit Erez requires some dramatic adjustments. The play tells of a young actor whose father has died. He sets off for a journey on a wagon which is falling apart, with a dubious partner and wise ballerina. The adventures develop rapidly and are not particularly pleasant – perhaps not just a story about a travelling theatre, but a metaphor for theatre and culture defeated by society and government. The play was born out of a collaboration between the actor Zahi Glick, the author Amit Erez and the director Itai Bleiberg. It was inspired by a book by Jorge Angel Livraga Rizzi, who in 1957 founded New Acropolis, an international non-profit organisation that defines itself as “a school of philosophy in the classical tradition”. Under its “wings” Glick created the “Bmahut” theatre that presented the play. Bleiberg directed a beautiful and moving show in the open amphitheatre. He was assisted by set designer Talia Ottolenghi, costume designer Rita London; choreographer Mia Joseph. The music was by Almog and Tal Modei Bruchstein, and the excellent production by Moludzon Anat. Above all, the evening belonged to the wonderful actors: Meital Peretz was charming; Amit Rosenberg – versatile, Boris Schiff and Zahi Glick, the lead actor full of charm, innocence and enthusiasm. The show was a true parting gift for the Israeli theatre festival.