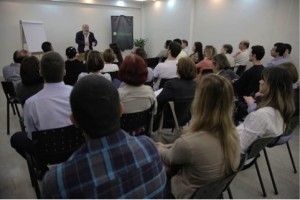 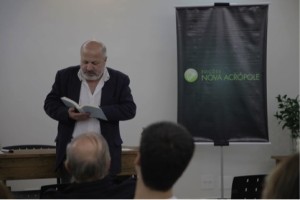 At the New Acropolis Centre in Santos, Professor José Seabra Rodrigues Filho gave a lecture entitled “The Roman Philosophical Tradition: Cicero”, which was followed by the presentation of the book “Academica”. This is the first Latin to Portuguese translation of the Roman philosopher Marcus Tullius Cicero (106 – 43 B.C.), published by Ediciones Nueva Acrópolis, 412 pages, bilingual edition.

Prof. Seabra Rodrigues Filho, who is also the author of this translation, is a lecturer at the Department of Classical and Vernacular Literature at the University of San Pablo.

Regarded as Cicero’s main theoretical-philosophical work, the work is constructed in the form of dialogues based on a theme from ancient Greek philosophy: the Theory of Knowledge. “Academica” deals with how the mind acquires knowledge and how man can give or withhold his consent to appearances. The author also presents the conflicts that divided the two Academies: the ancient Academy, led by the disciples of Plato, and the new Academy, founded by Arcesilaus.