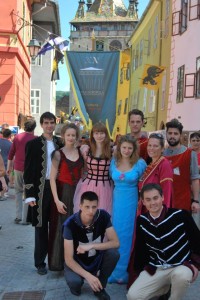 As is now traditional, New Acropolis participated in the 21st Sighisoara Medieval Festival. It offered two lectures: “Fortesses of Transylvania” and “The Order of the Dragon”, and staged two plays for children inspired by traditional Romanian fairy tales. It also held different workshops, such as one on decoration of archaeological reproductions and another on knots. The Athena Studio organized an exhibition of carvings, and the NA Publishing Company presented its latest publications. The event was attended by more than 20,000 visitors from around the country.