The Tel Aviv branch hosted a musical-philosophical jam session. The session concluded a 6-month process during which a group of 10 musicians and singers investigated the relationship between life and music, and between philosophy and art. The meeting included three parts that symbolize different dimensions of the musician, and also relate to the three layers of the human model. The first part, representing Soma, is expressed when the artists explore themselves. Every musician expressed his own reflections using his instrument and musical improvisation. In the second part, representing Psyche, the musicians were practicing dialogues. The interaction between the artists and the synergistic flow of sounds created a new world which is beyond the private world of each individual musician or singer. In the third part, representing Nous, the musicians studied their ability to work in a team, to be part of a band, to collectively create and express values such as harmony, awakening, listening, simplicity and courage. In order to strengthen the communication with the audience, the musicians sat in a circle at the center of the room, and the audience that included 54 participants sat around them. The result was exciting, thought-provoking and inspiring. 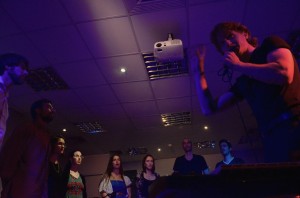 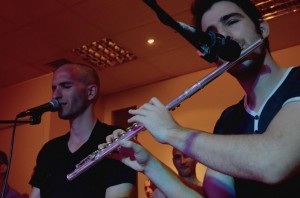