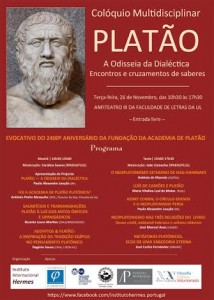 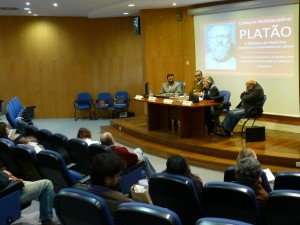 On November 26th the Symposium: The Odyssey of Dialectics – chronology and crossroads of knowledge, was celebrated at the Faculty of Arts of Lisbon University, to commemorate the 2,400 years of the Foundation of Plato’s Academy.The event, organized by IIH (Hermes International Institute) was supported by CFUL (Center for Philosophy of Lisbon University), OINAPO (International Organization New Acropolis in Portugal), IPAEHI (Prometheus Institute: Association of Historical Interdisciplinary Studies) and COEV (Vyasa Center of Oriental Studies).
The symposium included lectures by the following researchers: José Carlos Fernández (OINAPO), “Platonic metaphors, echoes of an eternal wisdom”; Paulo Alexandre Loução (IIH), “Henry Corbin, Persian Neoplatonism and the actuality of the imaginal world” and Ricardo Rubio  Martins (CHUL / IPAEHI / CEOV), “Sacrifices and transmigration. Plato in light of Orphic and Upanishadic myths”.  The official record of this symposium, which followed the homage to Plato on World Philosophy Day (November 21st) at the D. Dinis Center of the New Acropolis Cultural Association in Lisbon, entitled The Actuality of Plato’s Philosophy, will soon be published, with the commitment of future collaborative activities between IIH and OINAPO, with the aim of promoting the timelessness of classical philosophy.