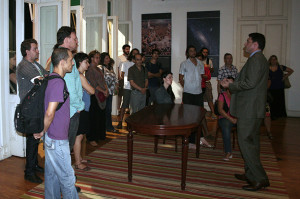 New Acropolis in Porto Alegre inaugurated a symposium on ancient India with a guided visit of an exhibition mounted throughout several rooms of the cultural center.

Professor Fabiano Camilo presented the lecture Philosophical Schools of India. The lecturer spoke of the Bhagavad Gita as one of the fundamental classical texts, and according to him Hindu philosophy leads us to a greater understanding of the laws governing the relationship between man and the Universe.