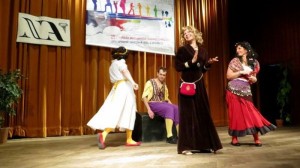 The Dark Blue Festival, known especially as the arts festival for visually impaired children and youth, celebrated its 25th anniversary in Brno. Together with blind young actors, New Acropolis volunteers prepared and staged a comedy of Molière, “Scapin’s Deceits”.

The nearly two-hour performance was seen by more than a hundred visitors and was praised with excited applause at the end!