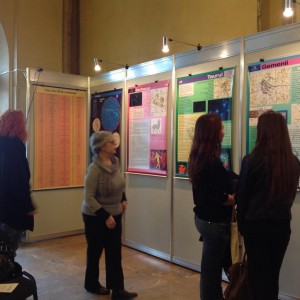 The lobby of Bucharest City Museum hosted the ‘Closer to the Stars’ exhibition. In putting together this exhibition,  New Acropolis aimed to bring a new perspective about a world that may appear dark and chaotic, but is in fact based on precise movements and has a meaningful complexity. The material that was presented addressed essential topics in the history of astronomy, biographies of great personalities, constellations and elements of mythology. This exhibition invited all to rediscover a part of human history, seen through scientific discoveries but also through myths about stars.

As representatives of a school of philosophy in the classical manner, the members of New Acropolis sought to highlight that beyond the amazing scientific discoveries based on technological progress, the Universe and stars give us timeless landmarks encoded in a symbolic manner that can be a valuable source of inspiration for the man of today and tomorrow.

On the first day of the exhibition, the director of New Acropolis Romania, Mr. Ivo Ivanovici, presented the book Age of Aquarius and held a lecture outlining some aspects that are specific to our era, differences between this era and the earlier ones, specific challenges that it brings and ways to better use its opportunities.