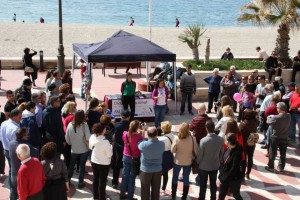 Many women of all ages and nationalities had the opportunity to make their personal contribution about feminine values, at the New Acropolis interactive stand at the Carmen de Burgos seaside promenade in Almería, in occasion of International Women’s Day.

The stand generated great interest from women who wanted to be involved in this celebration with a symbolic gesture of writing a feminine value on a paper and placing it in a container collecting all the women’s symbolic contributions.  Passersby also received a small gift in the form of a phrase written by a famous woman. The stand also gathered a large audience around funny monologues that were presented in the street, in order to provoke reflection on the role of women in society.

The event ended with a floral offering to the statue of Celia Viñas in the Plaza Bendicho, accompanied by the President Mari Luz Segovia of the cultural association which bears her name, as one of the most visible female icons of this city.

With these activities, New Acropolis aims to value the legacy of great women of the past, as well as to assert women in the present through the search for a woman’s true identity and thus leading us all towards a future where the feminine and the masculine collaborate and complement one another.