Visitors of New Acropolis Hungary’s three-day series of programmes at Széchenyi István University of Győr were introduced to the life and scientific achievements of Nikola Tesla. Dr. Ferenc Havasi, a member of New Acropolis and professor of the University of Szeged, presented the highlights of the life and work of the Serbo-Croatian physicist and inventor based on his autobiography (My Inventions). The talk, while introducing the scientist’s major inventions, also presented the moral background of his discoveries: What kind of exercises did he use to develop his legendary imagination? How did he obtain the ability to test his inventions “in his head”, saving money and time, and yet arriving at accurate results? What sorts of moral and social issues was he concerned with at the same time? How was he inspired by philosophy and art in producing his inventions? At the end of the talk, participants got acquainted with one of his most spectacular inventions called the Tesla coil , which can transform 15V voltage into 100,000V. 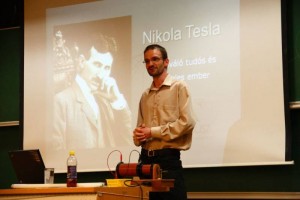 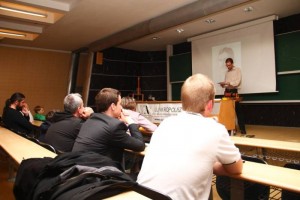