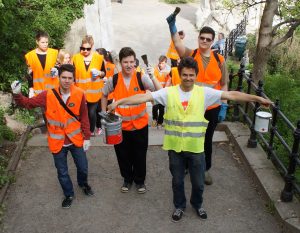 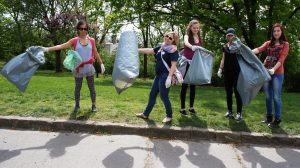 For the 25th time, organized jointly by the Budapest Center of New Acropolis Hungary and Főkert Zrt., volunteers gathered on the occasion of Earth Day to make one of the main tourist attractions of Budapest, Gellért Hill, even more attractive. Participants included four secondary schools, homeless people supported by a foundation, and volunteers from the neighbourhood.

In a span of 5 hours, about 100 pairs of hands collected 70 sacks of garbage, painted 20 benches and 200 metres of railings, and removed several wheelbarrows of earth from the drainage works.

At the beginning of the day, each group of volunteers received a virtue by spinning the Wheel of Virtues, which helped them to contemplate the efforts made for bettering the environment in the context of such ideas as creativity, courage, attention and resolution.