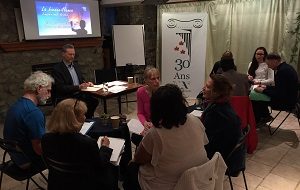 New Acropolis organized an activity as part of the United Nation’s International day of Living Together in Peace adopted on December 8, 2017. In a world where divisions and misunderstanding between peoples is persistent and where separatism and extremism are increasing, the United Nations General Assembly has declared this international day by “Acknowledging that living together in peace is accepting differences and having the ability to listen to, recognize, respect and appreciate others, as well as living in a peaceful and united way”.

New Acropolis shares this ascertainment of the UN and notices a growing gap between ideals and what humans experience in real life. How to remedy for example the loss of depth in social relations? The Principles of the United Nations are shared by New Acropolis since 1956 in more than 60 countries around the world through an inner training with the study of comparative philosophy. To learn more about the United Nations International Day of Living Together in Peace: https://www.un.org/en/events/livinginpeace/