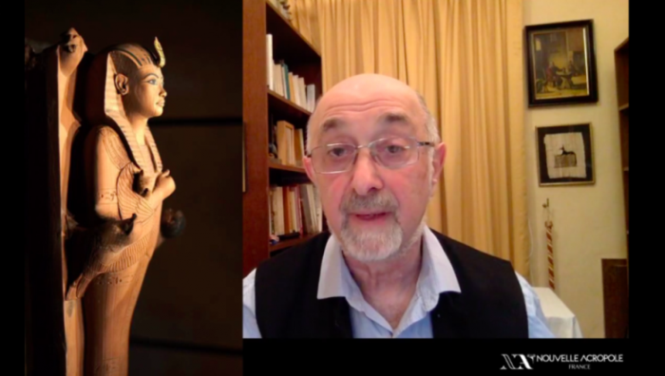 The Paris – 5 New Acropolis Center presented a lecture on Facebook Live on the topic of reincarnation in Ancient Egypt by anthropologist and philosopher Fernand Schwarz, founder of New Acropolis France.

The doctrine of reincarnation is very present in the East and also in the teachings of Pythagoras, however we don’t know much about it from the point of view of the Egyptians. The principle of reincarnation is,
nevertheless, at the heart of the metaphysics of ancient Egypt, giving life to one of the most wonderful and lasting civilizations in history.

Now that we are coming out of confinement, the doctrine of reincarnation is a source of precious teachings about nature and the transformations of consciousness.

The Egyptian Book of the Dead, tells us about Psychostasia (the weighing of the soul), and the different states of consciousness of the human soul to be reborn in another form. Thus it conveys very current keys to understand the stages of transformation of the consciousness from death to rebirth, such as the experiences of confinement and the end of confinement.

A night to immerse ourselves in the mysteries of “Life After Life” according to the teachings of ancient Egyptian wisdom.