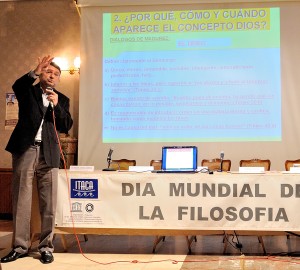 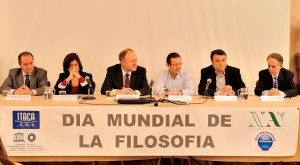 Saturday, November 17 was held in Valencia the first Congress in commemoration of the World Philosophy Day, promoted by Cultural Space Ithaca, sponsored by Unesco Club Heritage and in collaboration with the International network of Universal Ethics and New Acropolis International Philosophical Organization.Throughout the morning, we had the pleasure of listening to two papers, one in charge of physician and doctor in philosophy, Francisco Verdú, who spoke  on Today of Platonic thought. And then another in charge of doctor in philosophy and psychology and Professor at the University Jaume I of Castellón, Pascual Casañ, on the Concepts of God and the universe in Plato.

The afternoon session began with a talk in charge of the President of Unesco Club Heritage, José Osuna, about The seventh letter of Plato and its application at present. José Osuna highlighted the lack of  and dissatisfaction as current major diseases, and left US with an interesting phrase: “we must not strive to change the world, just lead by example”. 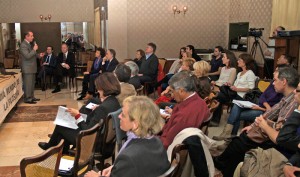 The following presentation was conducted by the President of the international network of Universal Ethics, Miguel Angel Padilla, who told us of Platonic values, notably justice, strength, temperance and prudence, which are the positive qualities that according to Plato will enable us to develop in a balanced, consistent with our human nature way. The last paper was in charge of the doctorate in anthropology and journalist Mª Dolores Fernandez Fígares, who analyzed the subsequent  of the Academy founded by Plato, with influences received from other movements such as stoicism and eclecticism, and its impact on the rise of Neoplatonism, highlighting also the work of Platonic little known as Numecio of Apamea or Albino of Smyrna, and the writings of the current philosopher Giovanni Reale to recommend us.
The ceremony closed with a poetic glimpse in charge of the Group’s poetry Calliope, with poems about the books, philosophy and Plato, and a small cocktail party, where many attendees could converse and exchange impressions to the Platonic way