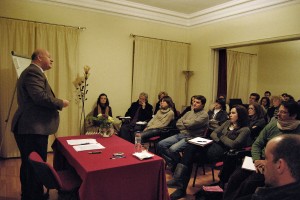 The Director of New Acropolis in Portugal, writer Jose Carlos Fernandez, gave a lecture entitled “The Moon Goddess and the eternal feminine.” This activity is part of the series “The Secret Doctrine of HP Blavatsky – Archaic Symbology” being held on the premises of New Acropolis in Lisbon since last year. This is the fifth lecture in the series, each one having been thus far well attended. Russian born Helena Petrovna Blavatsky (1831-1891) was a philosopher and writer, author of the books “Isis Unveiled” and “The Secret Doctrine” among others.