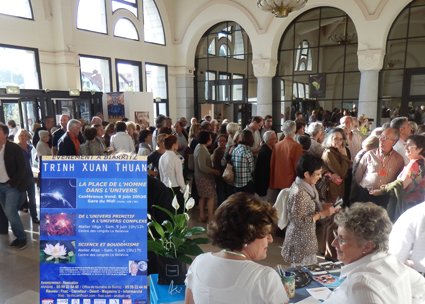 New Acropolis Biarritz (France) organized two workshops led by the famous Buddhist astrophysicist Trinh Xuan Thuan, who was recently awarded the Simone and Cino Del Duca Award for his literary work and his contribution to bringing science closer to the general public. Louis Pauwels also received the prize for his latest book, “The Cosmos and the Lotus.”

Thuan’s popularity and global prestige attracted a large audience interested in such topical subjects as those presented in his first workshop, including the age of the universe, exploration by telescope, the four elemental forces, the Planck Wall, the principle of light, black holes and the theory of unity.

The theme of the second workshop was the convergence between modern science and the fundamental principles of Buddhism, its system of enlightenment and contemporary scientific thinking. Why do humans insist on “unreasonable effectiveness” to understand the universe as a combination of chance and necessity?

The most recent scientific discoveries, claims the astrophysicist-poet, are adding new concepts that speak of the role of consciousness, of the sense of beauty, of metaphysics in science and of the intimate relationship between humankind and the rest of the cosmos.

Professor Thuan hinted at the feasibility of linking what we see today as apparently contradictory, demonstrating that scientific thinking and spirituality can coexist. The human being is a microcosm within the macrocosm, everything is one and multiple at once.   New Acropolis School of Philosophy has been presenting these concepts in its programs for more than 50 years.