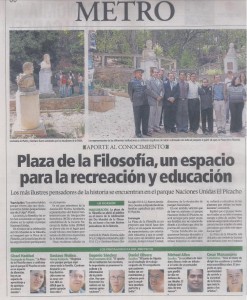 New Acropolis Honduras commemorated World Philosophy Day with the opening of Philosophy Square and the unveiling of three sculptures of philosophers Plato, Giordano Bruno and Hypatia. This square is the product of the great generosity and hundreds of hours of selfless collaboration by volunteers from New Acropolis Honduras. The idea of creating a cultural, educational and recreational space in the Park of the United Nations was born ten years ago, when the National Director of New Acropolis Honduras, Gustavo Molina, arrived in Tegucigalpa to found a New Acropolis in Honduras. During his first visit to the National Park El Picacho, he was guided by a gardener who told him that the former president of Honduras, Carís Andino, came to the “Parnasito” – located in what is now Philosophy Square – to think and sign important documents for the country, including the agreement to stop the exploitation of the mines of San Juancito in the forest of “La Tigra.” “Parnasito,” practically buried in mud and debris, has resumed its original shape after two years.

Gustavo Molina thanked the sculptors – National School of the Arts alumni Michael Allen and Daniel Olivera, led by Master Cesar Manzanares, a recent professor at the school – and distinguished members of New Acropolis at the national park, along with Giselle Haddad, Director of the Foundation, for providing the space next to Confucius Square, the Central American Bank of Economic Integration (BCIE), Gutierrez and Associates, and all those who collaborated with New Acropolis. Each depiction of these remarkable philosophers has a plaque with a description and brief history, enabling visitors to appreciate why they adorn Philosophy Square. The sculptures were unveiled during the commemoration, to the enthusiastic applause of those present. With the creation of Philosophy Square in El Picacho Park for the residents of Tegucigalpa, New Acropolis celebrated World Philosophy Day and the anniversary of its founding in Honduras.