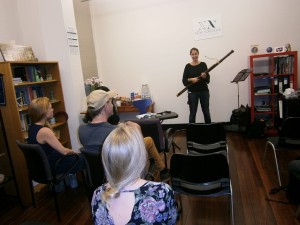 Melodie plays the Baroque bassoon throughout Europe and teaches in the city of Porto, Portugal. Graduate of the Swiss school of ancient music ‘Schola Cantorum Basiliensis’, she was the first to obtain a pedagogical degree for her instrument. She is currently on tour, and for two years she will visit 24 countries including Australia, which was her seventh stop. Her project “Melodie around the world”, focuses on the pedagogical role of ancient music, the transmission of traditional music and its adaptation to the modern world. Melodie presented a workshop on this instrument and gave a talk on her project in the lecture hall of New Acropolis in Sydney. The activity had the support of the Consulate General of Switzerland in Sydney.