In celebration of World Philosophy Day, New Acropolis in the cities of Ukraine held a number of lectures on philosophy, science and art.

New Acropolis of Kiev hosted a lecture by the Ukrainian philosopher Anatoly Akhutin, titled HomoEuropaeus. A Man In Question.

New Acropolis of Odessa hosted a lecture by Dr. Oksana Dovgopola, Professor at the Odessa I. I. Mechnikov National University, addressing the topic Philosophical understanding of our role in history. 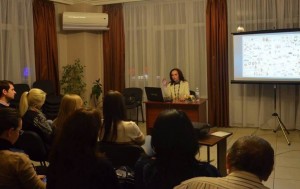 Oksana Dovgopola, Ph. D., Professor at  the Odessa I. I. Mechnikov National University

New Acropolis in Lviv held a workshop Ancient Philosophy in the 21st century: Everyday Exercises whereby participants engaged in practices from philosophical schools of Ancient Greece (according to What Is Ancient Philosophy by Pierre Hadot).

New Acropolis in Dnipropetrovsk held a lecture on The Platonic Academy in Florence about the cradle of Renaissance ideas that brought together the greatest thinkers of that time, who were faithful to the ideals of the Renaissance.