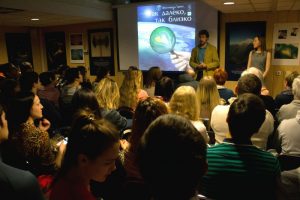 The International Festival of Philosophical Cinema was organized by New Acropolis of Central Russia, and its Moscow branch inaugurated the event with the documentary Home by French film-director Yann Arthus-Bertrand. We thank the collaboration with “GoodPlanet Foundation” for granting the rights for the documentary screening in the territory of Russia free of charge.

More than one hundred people attended the screening in Moscow which was followed by a set of simple ecological practices that can help reestablish the ecological balance of our planet. The Home documentary and other films by Yann Arthus-Bertrand shall be screened in various cities of Russia with the kind permission of “GoodPlanet Foundation”.