Citizens of all ages who were walking along the Paseo de Almería had an active participation in the improvised ‘Cinema Stand’ that New Acropolis set up in the street, on the occasion of the celebration of World Philosophy Day, with the theme ‘Philosophers go to the Movies!’.

It is said that cinema is probably the most influential art of the 20th century. Sometimes the expressive power of film joins forces with a philosophical message that impacts the human heart and awakens a vital reflection on reality, on the meaning of existence. Star Wars, Matrix, The Lord of the Rings, etc. are well-known movies and representative of the theme of this year. Passers-by, dressed up with costumes that they chose among our props, had a fun time improvising scenes from movies with photocall. Participants also had time for reflection, witnessing brief theatrical philosophical dialogues taking place between a teacher and students.

The event ended with a floral tribute at the foot of the statue of Almeria to the Educator in the Plaza Juan Cassinello. 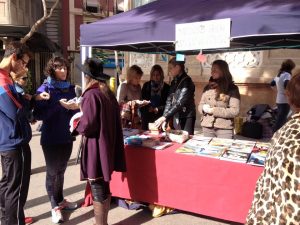 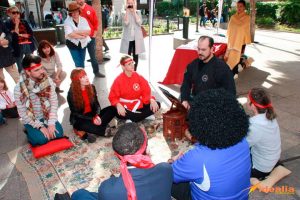