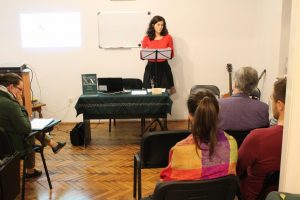 Lecture dedicated to International Music Day; music – term in relation to which the Greeks understood all the arts and considered education for the soul, as exercise is for the body. The talk included biographical info about two great Romanian artists:

– Hariclea Darclée, born Harichi, was a Romanian soprano singer born on June 10, 1860 in the city of Brăila. She studied music and theater in Vienna and then in Paris. A self-taught mind who continually aspired towards perfection, she always interpreted operas in their original languages. A world-class soprano, Hariclea conquered the audience with her talent.

– Dinu Lipatti, born in 1917, was a pianist, director, composer and music critic. He performed in his first concert at the age of 7 and began studying at the conservatory at age 12, while taking piano lessons with Professor Florica Muzicescu. His first symphony, “Șătrarii”, was presented to the public under the direction of the master of the band of Mihai Jora. Dinu Lipatti was able to transmit a valuable legacy, and was an example of life characterized by the impulse to work, modesty, excellence and care for others.

The event concluded with a guitar recital.