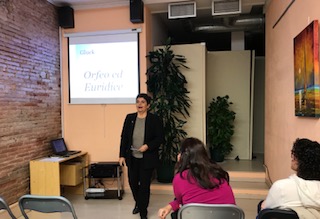 After explaining the myth narrated by the classical author Ovid in his book “Metamorphoses”, and introducing the opera which Gluck composed with a sober, quiet, paused style, and with an elegant and serene beauty, Olga Sala discussed each one of the spectacular acts of the opera, as participants also listened to the music.

It all begins when Orpheus cries over the death of his wife. Cupid encourages him to go into the underworld to rescue her. After defeating the Furies and saving his wife, she begs him to look at him. Letting himself be carried away by his desires, he looks at her and she dies in the act.
Unable to continue living – here Orpheus sings his famous aria “Che farò senza la mia Euridice”-, Cupid appears and brings Eurydice back to life by order of Jupiter. Finally love triumphs.

Olga emphasized the symbol of the Furies as those things that make us doubt, suffer and agitate our lives; and the symbol of the lyre representing the firm and decisive objectives we have set our minds upon in spite of distracting life circumstances.