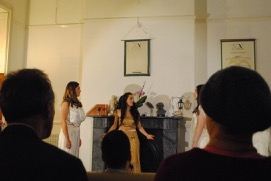 A new version of a short course entitled “The Power of Myth” featured a very special event: a performance which dramatized the story of the Edda, describing the creation and destruction of the world according to Norse mythology.

The performance was created by an all-women theatre group called The Temple, whose aim is to return to the origins of theatre as a means of transmitting a spiritual experience.

After the performance there was an animated question and answer session with members of the cast, ending with a convivial meal together and an opportunity to get to know the “actors behind the masks”.