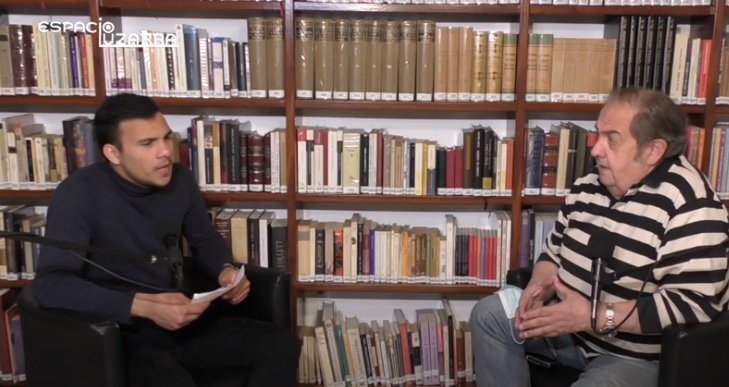 As part of Espacio Luzarra’s Paideia podcast, Alexandro Bello talked with José María Urrutia. The Mexican-born former pelota player is a descendant of a Basque family of pelota players, which he himself calls the “dynasty of the immortals”. His father traveled the world: United States, Egypt, Italy, France, Belgium, Spain or China. He even inaugurated the frontons of Manila, capital of the Philippines, and Gernika (Bizkaia). In the latter he served as intendant, already in the twilight of his career.

So his passion for pelota, a game more than three thousand years old, which was already played by the Aztecs, runs in his family. He confesses that his career as a pelotari could have been more extensive and fruitful, but his rebelliousness and youthful recklessness cut it short too soon.

Worried about the situation of the Basque pelota and the sport in general, he feels that it is very influenced by the media, since it obeys to economic and market interests, more than to a spirit of healthy competition. In his opinion, there are few initiatives to promote the sport as a link between countries. He claims the ball game as a universal good, since it is not exclusive to any one people.

He has a collection of material related to pelota and organises exhibitions, proud to share his treasure with the public. He is also the author, together with Javier Sagastizabal, of Las Raquetistas, a small book about women pelotaris of his time. A work that allows us to get to know these elegant sportswomen who gave great spectacle on the court.

To recapitulate his story, at 68 years of age, José María leads a simple life. He has few economic resources, no telephone or car, but he feels happy and free. Full of passion, he says goodbye, stating unequivocally that if he were born again he would be a pelotari again.