This episode of The poetic view is all about the life of Phillis Wheatley.

Her story starts in 1761 when as a seven- or eight-year-old girl, she was kidnapped and taken away from her country, nowadays Senegal, to America to be sold as a slave. John Wheatley became infatuated with her and bought her.

Far from being treated like a slave, she lived with the Wheatleys more as a member of their family. They taught her to read and write, and they encouraged her to use her talent for poetry. Her life was not easy as she was not white. 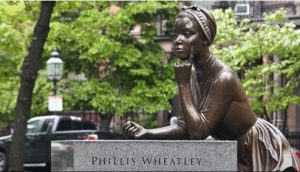 In 1773 she published her book Poems on Various Subjects, Religious and Moral which was a great success. She became famous and rubbed shoulders with great celebrities such as the mayor of London, Benjamin Franklin and General Washington himself, the future president of the United States.

She died at the age of 31, free and on her own. But great figures of history do not come here to look for acknowledgement but to do their work for humanity.

Without doubt, Phillis was an exceptional being. She saw hope in the new American continent and visualized the Goddess Columbia – a welcoming mother with her arms wide open, something like a New World Athena. This mother goddess appears in the name of the city of Washington D.C. (Columbia District). She is protecting the capital of the United States of America from above, which Phillis Wheatley recognized and showed the world.