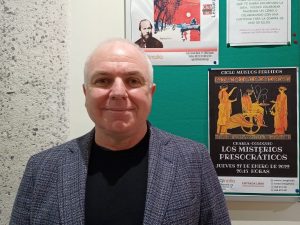 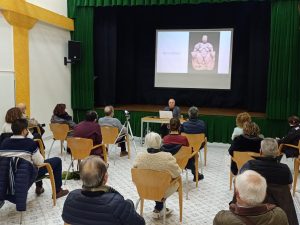 Cicero (1st century BC) wrote: “The Mysteries have led us from a savage and cruel life to civilisation and have moderated us and made us human, and we have known the so-called “initiations”, which in reality are the principles of life, and we have received not only a guide for living with joy, but also for dying with better hope.” [Treatise on the Laws 2.4.16]

What The mysteries are or were was the subject of an excellent talk given by Iván Rodes, a philosophy lecturer at the New Acropolis Association in Alicante.  In a presentation that combined clarity and depth, the speaker drew the audience into this subject which goes so far back in history and still reverberates in its effects up to the present day.

The speaker traced the roots of the mysteries to the end of the Neolithic period – in the second or third millennium BC – until the 4th century AD, and also to the cult of the mother goddess Innana, and her consort Dummuzi in Sumer. For more than 2,000 years they offered a deeper and more essential option to the spirituality of the human being, in addition to the religions of the time.

Iván Rodes pointed out that the mysteries respond to a basic need of the human being: to know who we are, where we come from, what is our destiny, in this and in other lives. References to the mysteries have come down to us through initiates, poets and philosophers, such as Homer, Hesiod, Aeschylus, the Pythagoreans, Empedocles, Herodotus, Plato, and many others. The Greek tradition revolved around spiritual and moral references that have their roots in the mysteries.

The speaker concluded that the Mystery Schools have always been at the heart of every form of civilisation, promoting mysticism and religion, artistic and political forms. They gave rise to many of the most important figures of their time in all fields of knowledge and action, such as the Pythagoreans, the geniuses of the Renaissance, Newton, Mozart, and the great liberators and legislators of our modern history, who belonged to Masonic lodges and whose influence can be seen in all modern constitutions that aim at fraternity, equality and freedom of the human being.