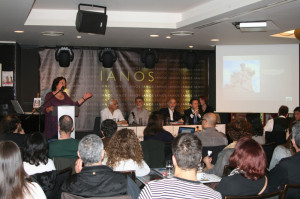 24 centuries since the founding of the Academy of Plato and in coordination with the World Day of Philosophy of UNESCO, the International Cultural and Philosophical Organization “New Acropolis” organized, with the contribution of international organizations and personalities, an open workshop titled “Plato: thinking, creating, appealing“, at the IANOS bookstores (24 Stadiou Ave., Athens, Greece).

The event was held on 20 November 2013 combined with the World Day of Philosophy of UNESCO and was under the auspices of UNESCO – Hellas.

Via the workshop’s motto “24 hours philosophy in life, 24 centuries Academy alive“ it was aimed to highlight the different approaches and impact of Plato’s work in education and culture’s 24 centuries later. 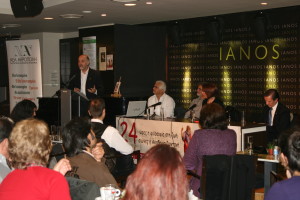 “Philosophy for us in “New Acropolis” is not an engagement for the few, or some theoretical material for the classroom, but the
very act of life. Philosophy is not a decoration but the essence of the human spirit. The philosopher is a very practical person that enjoys life and can solve the practical problems of life ….thus, philosophy is for everyone…it forms the soul. Philosophy is as eternal as the human being who wants to make a better world. So, with this message about timeless philosophy let’s start this workshop.”
With these words the President of Philosophical and Cultural Organization ” New Acropolis” in Greece , Maria Jimenez – Plana, set the start for the event ” Plato : thinking, creating, appealing” that was held in Athens (Greece) with a great participation from people of all ages. 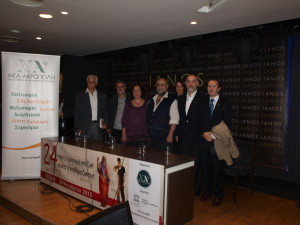 Members of the academic and research community presented their studies originated from Plato’s work, more specifically: José Osuna, President of the UNESCO Club for the Protection of the Intangible Cultural Heritage, Fernand Schwarz, professor at the University of Paris in the Department of Anthropological

Research and Chairman of the Hermes International Institute, Panicos Papadopoulos adjunct professor at the Civil Engineering Department of the Polytechnic School of the Aristotle University of Thessaloniki, Savvas Pattakos, author of book “The Secret Doctrine of Plato.”

Also, the event was complemented by a theatrical performance titled “Plato’s Cave” and by an exhibition of photographic material on “The Journey of Philosophy.”