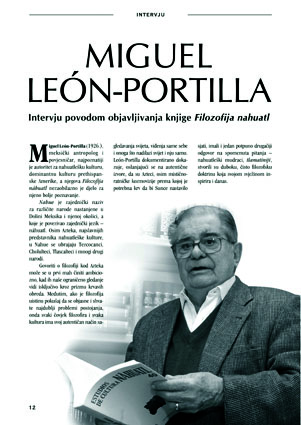 Prof. León-Portilla, thank you for taking the time for this interview. First we would like to know what sparked your interest in the ancient pre-Hispanic cultures?

1.    When I was very young I was able to read books like The Ancient History of Mexico from the XVIII century Jesuit Francisco Javier Clavijero.  His works had been translated into Italian, French and German. Additionally, as a child, I visited several archaeological sites with the father of modern Anthropology in Mexico: Doctor Manuel Gamio. This is how, since I was very young, I felt attracted to ancient indigenous cultures and also to the descendants of those peoples, builders of a civilization. Manuel Gamio used to tell me: don’t think only about the dead Indian; be concerned also for those who live today.

–       What led you to explore the philosophical thought of the Nahuas?

2.   I read some translations of nahuatl texts done by Angel Maria Garibay, my other great teacher. There were questions and issues like these: Can we speak true words on this earth? What is there beyond death? Why is the Life Giver hiding? Is it possible to set a course to the heart of the earth? Questions like these sounded to me like those of some Pre-Classical Philosophers.  When I read what Garibay had written I was studying in California where I wrote my Master’s Degree Thesis on the work of Henri Bergson “The two sources of Morality and Religion”. It is an extraordinary book, philosophical as well as poetic.

–       What elements of Nahua Philosophy would you highlight because of their particular practical and useful vision for the man of today and the times he is living? 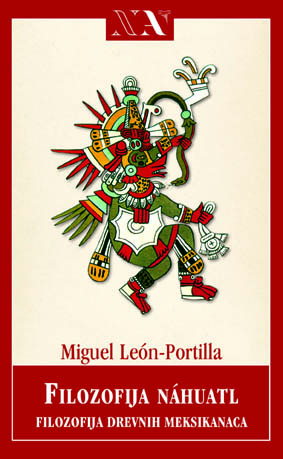 3.    I think that interpreting our existence as a result of Flower and Song, is like saying with firmly that a poetic vision of the world has had a permanent significant meaning to date. There are many texts, especially those of Huehuehtlahtolli, that are testimonies of the ancient word, containig ideas that are relevant to the current men and women.  I remember only one: Could it be that we have come to earth only to suffer? What can give us a certaind kind of happiness? So it was said by the Elderly: in order not to suffer, the Life Giver gave us laughter, our strength, food, dreams and sexual intercourse through which the earth is planted with people. All this is consolation for man. But if many things were to go wrong, it is not a reason for one to spend one’s life always crying. Look for a wife, look for a husband, there are eagles and jaguars.

–       Your book Nahuatl Philosophy undoubtedly proves the blossoming of the pre Hispanic Cultures which were not far behind the cultures of the Old World. Are the descendants of the ancient Nahua conscious of their great cultural heritage today?

4.   The descendants of the ancient indigenous peoples have been for many years in a truly dramatic situation. It was not until a few decades ago that some of them have had access to Universities and other Higher Education Centers. Now they also participate in the rescue efforts of their cultures.

–       You have written many books. Which is your favorite and why?

5.   Among the books I have written which I think may be of interest are: Nahuatl Philosophy, Vision of the Defeated, Ancient Mexicans through their Stories and Songs, Toltecáyotl, aspects of the Nahuatl Culture, and Tonantzin Guadalupe. It seems to me that those may be of interest because they reveal very valuable aspects of the spiritual culture of ancient Mexicans.

–       It is well known that you are deeply committed to the preservation of Mesoamerican Cultural Heritage. Can you tell us something more about this?

6.   Indeed. I believe I am committed to the heritage of indigenous peoples and the present situation of their descendants. They are the deepest roots in the cultural being of Mexico. Even today they still have very much to teach us, like respect for nature and for the sense of community; their love for the family; not having ambitions for economic wealth. In short, for smiling at life in spite of injustice and suffering.

–       Would you like to send a message to your readers in Croatia?

7. Croatia and Mexico have had relations since at least the late XVIIth century and then more intense in the XVIIIth.  This happened due to the presence of Croatian Jesuit Missionaries, who worked in Mexico amongst the Indian peoples of the northwest of the country. I will mention at least one. Ferdinand Konsag (1703 -1759), born in Verazding. He worked quite a few years in the California Peninsula and their buildings are preserved to date. They are known by the name of San Borja. He also wrote several books, one about the discovery of the eastern coast of the California Peninsula and other works. A few years ago we celebrated in California many of his great contributions. I think it would be good if Mexicans and Croatians became aware of this.